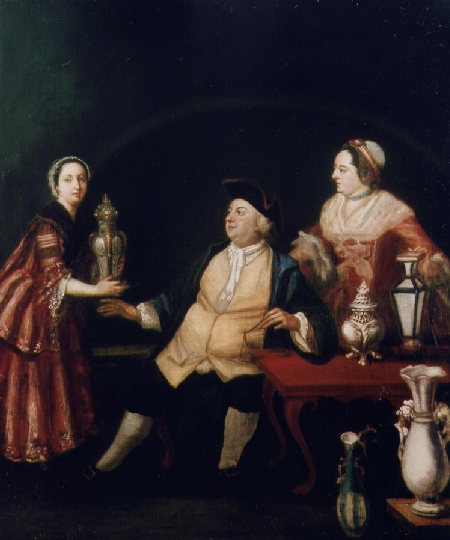 Nicholas Sprimont had a wife and a sister, who are depicted here with him and his works.Nicholas Sprimont was a son of Peter Sprimont and Getrude Goffin, born at Liege, 23 January 1716. He was apprenticed as silversmith to his uncle and godfather Nicholas Joseph Sprimont at Rue de Pont 16.

He arrived in England probably early in 1742 as he married, 13 November that year, at Knightsbridge Chapel, Ann Protin of Kensington, spinster. Only mark entered as large-worker, 25 January 1743. Address : Compton Street, St. Ann's, Soho where was the center of Huguenots community in London. The rate books show him as tenant of a house on the north side of Compton Street and two years later with additional back-shop. He remained in occupation here till 1748.

He also appears from 1747 in the Chelsea rate book as occupying half of Monmouth House in Lawrence Street, and from then onwards it seems to be clear that the new venture of Chelsea porcelain manufacture was to absorb his full interest and time (F. Severne Mackenna, "Chelsea Porcelain", 1948, based on the researches of Major W. H. Tapp).

After the sale of the Chelsea business to Duesbury of Derby, James Christie sold the remaining Chelsea productions which Sprimont appears to have retained as his own property. He remained living in Chelsea and Richmond till his death later that year at the age of fifty-four, since Christie's catalogue of his picture collection, sold 26-27 March 1771, describes them as brought from his houses in these two places. The picture of Italian, French, Flemish and Dutch schools in 173 lots realized the high total for the time of GBP 1,239. Sprimont is burried in Petersham Church below Richmond Hill. 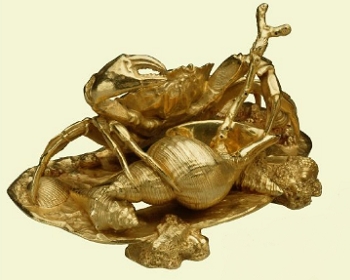 His largest pieces known are;

Another important item is;

For Discussion of the possible relationship in the work of Sprimont and Paul Crespin see A. G. Grimwade, "Crespin or Sprimont ?", Apollo, August 1969.

Nicholas Sprimont was a founder of Chelsea Porcelain Factory. He relocated to the village of Chelsea in the potteries section of England in the 1740's and by 1747 was a full-time manufacturer of soft-paste porcelain. His personal porcelain creations are likely to have been produced between 1742 and 1748. Some sources say Nicholas Sprimont died in 1756, having been in chronically bad health. But another source has Sprimont selling the Chelsea Porcelain Factory to James Cox in 1769. 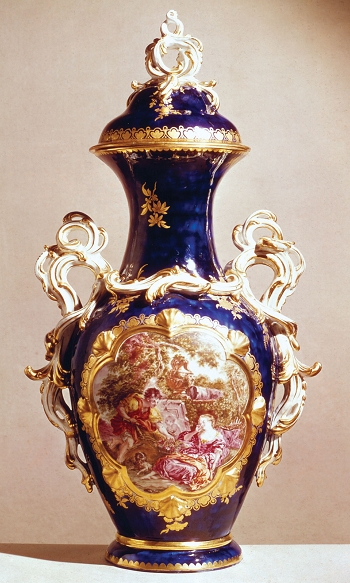 The entrepreneurial director was Nicholas Sprimont, a silversmith by trade, but few documents survive to aid a picture of the manufactory's history.

Early tablewares, being produced in profusion by 1750, depend on Meissen porcelain models and on silver prototypes, such as salt cellars in the form of realistic shells.

Chelsea was known for its figures. From about 1760 its inspiration was drawn more from Sèvres porcelain than Meissen.

In 1769 the manufactory was purchased by William Duesbury, owner of the Derby porcelain factory, and the wares are indistinguishable during the "Chelsea-Derby period" that lasted until 1784, when the Chelsea factory was demolished and its moulds, patterns and many of its workmen and artists transferred to Derby.

The factory history can be divided into four main periods, named for the identifying marks under the wares: 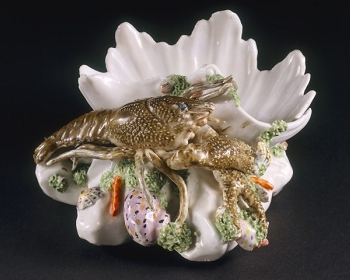 Crayfish Saltcellar, Chealsea, circa 1745These early products bore an incised triangle mark. Most of the wares were white and were strongly influenced by silver design. The most notable products of this era were white saltcellars in the shape of crayfish. Perhaps the most famous pieces are the Goat and Bee jugs in 1747 that were also based on a silver model. Copies of these were made at Coalport in the 19th century. 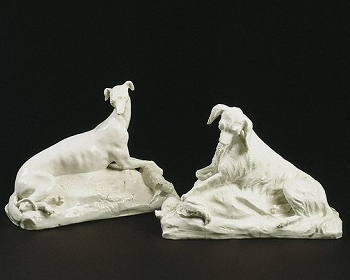 Dogs, about 1749, Chelsea Porcelain factory, V&A MuseumIn this period, the paste and glaze were modified to produce a clear, white, slightly opaque surface on which to paint. The influence of Meissen, Germany is evident in the classical figures among Italianate ruins and harbour scenes and adaptations from Francis Barlow's edition of Aesop's Fables. In 1751, copies were made of two Meissen services. Chelsea also made figures, birds and animals inspired by Meissen originals. Flowers and landscapes were copied from Vincennes. 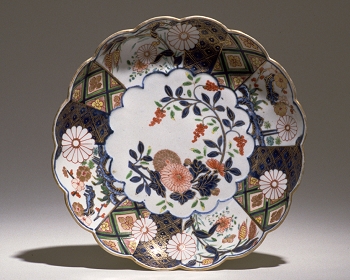 Imari style dish, Chelsea Porcelain factoryKakiemon (specific type of Japanese Imari pottery), subjects were popular from the late 1740s until around 1758, inspired by the original Japanese and then by Meissen and Chantilly. Some English-inspired tableware decorated with botanically accurate plants, copied from the eighth edition of Philip Miller's The Gardener's Dictionary (1752) were also produced in this period. 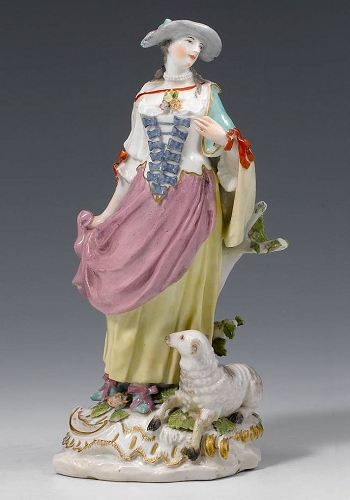 A Shepherdess doll, Chelsea Porcelain factory, circa 1760The influence of Sèvres was very strong and French taste was in the ascendancy. The gold anchor period saw rich coloured grounds, lavish gilding and the nervous energy of the Rococo style. In the 1750s and 1760s, Chelsea was also famous for its toys, which included bonbonnières, scent bottles, étuis, thimbles and small seals, many with inscriptions in French. In 1769 the failing factory was purchased by William Duesbury of Derby who ran it until 1784; during this time the Chelsea wares are indistinguishable from Duesbury's Derby wares and the period is usually termed "Chelsea-Derby". 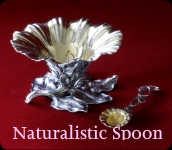